In the early 1900s, Winchester’s 11th-century cathedral was in danger of collapsing due to subsidence. The reason it’s still standing today is thanks to William Walker, a professional deep-water diver from Portland Road in South Norwood – a worthy addition to PPR’s Heritage Trail.

‘Diver Bill’ spent more than five years single-handedly propping up the cathedral’s water-logged foundations, using more than 25,000 bags of cement and thousands of concrete blocks, so that the groundwater could be pumped out.

Walker worked in total darkness in trenches full of peaty water as much as 6 metres deep, wearing lead boots and a heavy diving suit made out of cloth and rubber – but no gloves. Air had to be pumped down by hose into his huge round copper helmet. For much of the time until the project was finished in August 1911, he cycled the 70 or so miles home to his growing family in South Norwood every weekend, returning on Mondays by train.

Born in 1869, ‘Diver Bill’ trained with the Royal Navy at Portsmouth Dockyard, and worked on the Blackwell Tunnel and the Royal Victoria Dock in London, and on the building of the naval docks in Gibraltar. Unfortunately, his career was cut short when he succumbed to the Spanish flu epidemic and died in 1918.

The cathedral honoured his contribution at a thanksgiving service in 1912 and George V (whom he had taught to dive) made him a member of the Royal Victorian Order; and there’s even a pub named after him in Winchester.

Now thanks to sterling work by local historian John Hickman (who had spotted William Walker’s gravestone in Beckenham Cemetery) and designer Ken Baker, People for Portland Road has put this South Norwood hero on the local map. 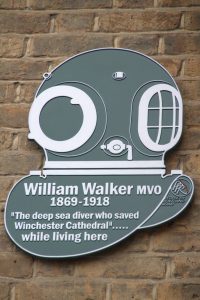 Ken Baker’s specially designed plaque for the exterior of 118 Portland Road, London SE25 4PL, Walker’s old home, was unveiled by the Dean of Winchester, Catherine Ogle, on 17 March 2018. Also in attendance were the Bishop of Croydon, Jonathan Clark, and the Mayor of Croydon, Councillor Toni Letts.

Afterwards there was a reception at the New Creation Assembly for All Nations Church in Portland Road, where local people mingled with some of Walker’s descendants, as well as members of the Historic Diving Society, including Gary Potter who campaigned for many years to have a Walker plaque erected. A documentary about Walker’s Winchester feat was screened, and catering was by South Norwood’s Essence of Cake.

To have a plaque dedicated to him on the house in which he lived in Portland Road makes us proud that there is now a very clear reference between the man and his great work.
Sadly, he died when my mother, Nancy, his youngest daughter, was only five, but I do feel a special connection, having been born in the house in Portland Road where he died in 1918.
I am extremely grateful to People for Portland Road for organising the plaque, thus ensuring that the remarkable achievements of William Walker, the Diver who saved a Cathedral, will live on in the locality.
– William Walker’s grand-daughter Margaret