Since April 2006, visitors to South Norwood Library and passers-by have been greeted by a mosaic artwork in the forecourt of the library. This was originally designed by Tamara Froud from Mosaic Art and inspired by the heritage of the area. The design was carried out working with local schools, community groups and members of the public. May Johnson, a local heritage expert, was on hand to advise and help with the design and commissioning.

Over the years, the mosaic had been badly damaged, not least by vehicles parking on it! So in 2014 discussions began between Tamara, local councillors and community groups with a view to repairing the damage. In September 2015 the repairs were finally completed, bringing the mosaic back to its former splendour. PPR was involved in these discussions and donated £500 to help pay for the repair. We also put pressure on the Council to ensure it was protected from vehicles in future! 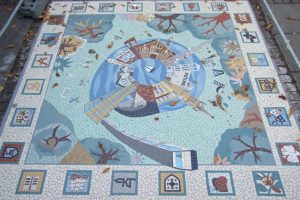